Preserving the Public Good over the Individual’s Self-Interest 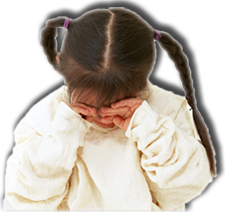 You may have read elsewhere on this site that I have two young children at home. One, a toddler, the other, a five month-old infant. My wife and I were discussing the topic of the natural state of humans by witnessing the behaviors of our children this morning. This quickly turned to a brief discussion of the state of nature” dialectic of Hobbes and Locke. I am on the side that man’s natural state is one of self-preservation and greed. To separate one’s thoughts and actions away from one of greed is to increase the influence of society around the individual in the form of exerting pressure to do what is best for the public good. The modern era, similar to all others, is subject to the conflict of the selfish personal interest versus the interests that serve the public good. In terms a toddler would understand, it is a matter of sharing our things with others.

Government is an instrument that exists to protect the individual from the selfish interests of the individual. It exists to protect and mitigate disputes over our property from ourselves, collectively. Rather than live in a world that is “solitary, poor, nasty, brutish, and short” we are all bound by a social contract that permits the government to moderate our selfish interests for the betterment of the whole. Rather than live in the world where the “tragedy of the commons” exists and, metaphorically speaking, all cows out to pasture leave nothing left for future generations because it is there for the taking now, government intervenes to ensure that there is something left for future generations as well as the current generation to benefit from and enjoy.

So, you might be asking yourself at this point, why are you writing all of this? Why spend the time to explain what I can learn in a high school civics class or a college-level class on political thought? As the potential for a government shutdown looms tomorrow, April 8, 2011 at midnight, we are reminded that we must work together to get past our differences. The Founding Fathers enumerated the separate of powers in the Constitution for a reason – to ensure that the majority does not subvert the minority in its own selfish will.

Perhaps James Madison, a founding father of this country, states it best in Federalist 51:

“Different interests necessarily exist in different classes of citizens. If a majority be united by a common interest, the rights of the minority will be insecure. There are but two methods of providing against this evil: the one by creating a will in the community independent of the majority — that is, of the society itself; the other, by comprehending in the society so many separate descriptions of citizens as will render an unjust combination of a majority of the whole very improbable, if not impracticable. The first method prevails in all governments possessing an hereditary or self-appointed authority. This, at best, is but a precarious security; because a power independent of the society may as well espouse the unjust views of the major, as the rightful interests of the minor party, and may possibly be turned against both parties. The second method will be exemplified in the federal republic of the United States.” 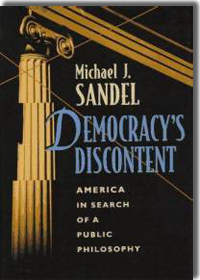 Past BBC Reith Lecturer in 2009, Michael Sandel, author of “Democracy’s Discontent,” writes extensively on the topic of the fundamental source of our feeling of discontent with our government as a people. Stated simply, there is an inherent conflict between individual rights and the public good.

Most recently, as evidenced in many court cases, the individual’s rights are more often championed and sided with at the government-level than establishing and nuturing an environment where the public good is more important than that needs of the individual.

Most recently, such as the 1950’s, although this wave in favor of individual rights has existed since the founding of this country, the preference of actions in favor of the public good has subsided in favor of what is good for the individual. For instance, how many Americans really know and talk to everyone in their own geographic neighborhood, are willing to accept greater taxes in exchange for more community services, donate to charity because it is fundamentally right to do so, rather than seek a tax break, how many attend community meetings, etc. Now, I’ll admit that many of these facets of society have transformed and now exist online and interpersonal relationships are now cultivated digitally or perhaps they exist within a social circle that isn’t within our own geographic neighborhood, but maybe within a group of friends who met through common circumstance. However, as a society, nuturing social capital in our communities and thinking and acting in favor of the public good has diminished greatly and steadily since this country’s founding. Americans, however, still cling to associations, as much today as times that pre-dated the founding of the United States, evidenced by Alexis De Toqueville that associations are something that make American life great:

“Americans of all ages, all conditions, all minds constantly unite. Not only do they have commercial and industrial associations in which all take part, but they also have a thousand other kinds: religious, moral, grave, futile, very general and very particular, immense and very small; Americans use associations to give [financially and personally], to found seminaries, to build inns, to raise churches, to distribute books, to send missionaries to the antipodes; in this manner they create hospitals, prisons, schools. Finally, if it is a question of bringing to light a truth or developing a sentiment with the support of a great example, they associate. Everywhere that, at the head of a new undertaking, you see the government in France and a great lord in England, count on it that you will perceive an association in the United States.”

Political parties are a form of the types of associations that I am referring to. However, when it comes to funding the government, lines today, are drawn so clearly and resolutely that there is no room for retreat or compromise. This is very disconcerting that neither side is willing to back down from a confrontation that exists on a defined timeline. It is as though we are witnessing a temper tantrum by a toddler on both sides and from each perspective, Democrat and Republican, they see themselves as irreconcilably correct. For the Republicans, they stand with a percieved electoral mandate to reduce the budget deficit and repeal the new health care bill that passed in 2010 at all costs because they reclaimed the House of Representatives last fall. What is most unfortunate from this stance is their wholesale and drastic cuts to social programs that many liberals champion without regard for many programs that conservatives prefer, such as defense spending. The Democrats percieve their perspective to be one that is seeking to protect programs that benefit the poor and downtrodden. We are at an impasse.

We are all taught by our parents at an early age to share, help others if it is within our means to do so (e.g. if your neighbor’s house is on fire, would you help to put it out?). However, much of America has lost much of its willingness to help the “other.” Be those who exist as the “other” – those who are gay, of another religious denomination or sect, your next door neighbor who you never talk to, fellow co-workers, fellow shoppers in a store – it really doesn’t matter, we, generally speaking, not to assume that this is entirely the case, seek to protect our own selfish interests above all others.

America witnesses slight glimpses of selecting the public good over selfish interests when disasters occur such as the recent earthquakes in Japan and Haiti or shortly after 9/11, but we always return to the norm of exisiting in our own personal bubbles, be they SUVs or dwellings without reaching out to others to build social capital among one another to collectively solve problems and build societal trust, understand and tolerate diversity and accept differences as what makes each of us unique, as something that creates value for the whole of society from the contributions of the individual. Many have lost sight of what makes America great and instead we stand stubborn in our perspectives, unwilling to try to see it from the “other’s” perspective. It’s problemmatic and a sad fact of reality when it extends as far as those we refer to as our political leaders on Capitol Hill. These individuals are the trustees and stewards of the public good and they act as though they are trustees of selfish and disproportionate interests — the interests that will get them reelected. Doing what is best for the country is now secondary to what will get a person reelected and protecting one’s seat in the House of Representatives or Senate.

I will not go so far as to abandon the system that we currently have, but what I am asking is that our elected leaders do what is best for the country, not for themselves. Stop playing politics just for a moment and realize that the decisions we make and actions we pursue today will affect others, now and in the future.

Acting as a steward has the benefit of a good moral conscience. Reframing the debate from stating that there is no such thing as global warming to one of economic opportunity, such as creating investment opportunities for companies who help alleviate our dependence on foreign oil, creates a sense of progress in reshaping energy policy within the United States. Be willing to explore ways to make exisiting laws better. Don’t outright reject something just because it’s from the “other” side of the aisle. As a parent would say, “grow up” or “act like a grown up.” Think of those who are dependent on the decisions you’re making now. How will they be affected?

America, as a society, needs to get back to creating opportunities to cultivate a sense of doing what is right for the public good, if not for our own generation, but for those who will succeed us. Perhaps then, we will witness a sacrifice of our own selfish interests so that the public good may perservere to benefit all of society at the hands of our elected officials.