In Search of a Job in the Government / Public Sector? Please Hold… 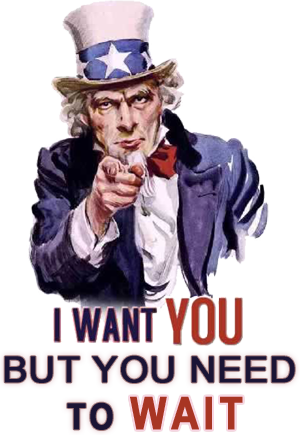 I happen to agree with the dean of Harvard’s Kennedy School of Government and the director of the National Association of Schools of Public Affairs who contend “that the government continues to drive away a majority of graduate degree holders” in the recent Washington Post opinion article, “The federal government is still too slow to hire” on July 3, 2011. At a time when the “government will face its largest wave of employee retirements in the next five years,” I am glad for the latest news that the Federal Hiring Process Improvement Act of 2010 (S. 736) will “build on the president’s directive, [that] requires all agencies to limit their hiring time to 80 days, inform job candidates of their statuses in a timely manner, convert to a universal résumé application and craft job descriptions as well as announcements in plain writing.” This bill passed the Senate, unanimously.

However, this bill failed to pass the House of Represenatatives, in fear of passing legislation that could be considered politically unpopular because it involves spending when it runs counter to the agenda of House Republicans and others seeking to stem the tide of government spending. It’s a shame that our leaders in the House of Representatives cannot rise above partisan politics for the betterment of the country. This bill affects people like myself, fully equipped with a Masters in Public Administration (MPA) because even though I have such a degree (much of its purpose is to serve in government, local, state and federal or the nonprofit sector), I have yet to receive a reply from any federal agency in response to positions I had applied to nearly a year ago. It’s a shame that, and I am not boasting here, but making an illustrative point as a metaphor for all recent college and graduate-level graduates, that my talent must pursue positions in the nonprofit and private sectors because the waiting period is longer than I can financially bear. I would love a position in the public sector, not for the benefits (which is why some choose to pursue positions there), but because I can actually help and put the tools I have acquired during my graduate-level coursework into practice and actually help this country become a better place for my having been a part of the public sector workforce. However, this is not the case and I have discontinued my search for a position in the public sector (at the moment), because I cannot afford to chase dreams of what could be when I have “a bird in the hand” in seeking a position in the nonprofit and private sectors versus “two in the bush” and good intentions by pursuing a position in the public sector. The common good could benefit from a less than political response by our elected leaders in Congress in instances like this.

I have written on the subject of “Preserving the Public Good over the Individual’s Self-Interest” before. This is another case in which there is great potential for the public good to benefit by decreasing the barrier to entry for positions in the public sector. However, laden with political, and I will add, selfish interests, concerned with reelection to public office because of a stalwart conviction to save the public money because of the appearance it would yield if one were to endorse S. 736, our elected leaders chose to vote this bill down. It doesn’t end there.

Even when presented with “deal of the century” politicians are holding onto their reputation, more so than considering what will help this country as the stewards they should be and are.

Our leaders may see themselves as doing the right thing, but in reality they are standing in the way of true and meaningful progress. I guess that is why many liberals are deemed as “progressives” because they seek to advance the domestic agenda and solve problems at home. I am not intending for this post to strike you as offensive or with a negative, rant-like prose, but I do intend and suggest that those who end up reading these words signal to their elected leaders that they do what is best for the country, not just the political agenda set before them by party leaders. It is time for our elected leaders to think for themselves and decide on the merits of a bill if it should pass or not and not on the overall agenda that will serve to keep those in power, in power.

I hope the voters are watching for instances like this. Perhaps, this is exactly what the voters want their leaders to do and perhaps it is not. Action does not result from inaction. It is time to act and do what is right for the country and not a political party’s agenda, especially when it comes to negotiations over the “debt ceiling” and perhaps when another such bill similar to S. 736 appears in Congress.